I moved to , from in mid June, I left JFK the morning of the 13th and compliments of the date line arrived the afternoon of the 14th. Thankfully I am not superstitious, I am sure there are a lot of people who would not want to start a multi-month relocation on the 13th. I was moved over here for work for three to six months, and I have to say that the time frame leading up to the move made the actual relocation a little like getting fired out of a cannon.

In less than three months prior to my move to Tokyo I broke up with my long time Girlfriend, went through a car accident that gave me a nice beating, spent half a month in Africa where I had a really intense experience (more on that soon), partially moved out of my place in the New York area so that I didn't really have a "home" (I am flying back to finish the move sometime in the next month or two), went through a major change in roles with a volunteer organization I work with and a whole host of other things. Basically, I went through such an intense period leading up to that I had zero time to prepare, or even think about the trip in advance.

So, I packed the day before, called a cab and went to JFK with four big bags and two backpacks not really knowing what I was getting myself into.

I have never been to before, the closest I've been prior to now was and , neither of which has anything in common with . But, hey why not see a place for the first time when you're moving there right? Needless to say my general feeling as I boarded the plane at JFK was here goes nothing. 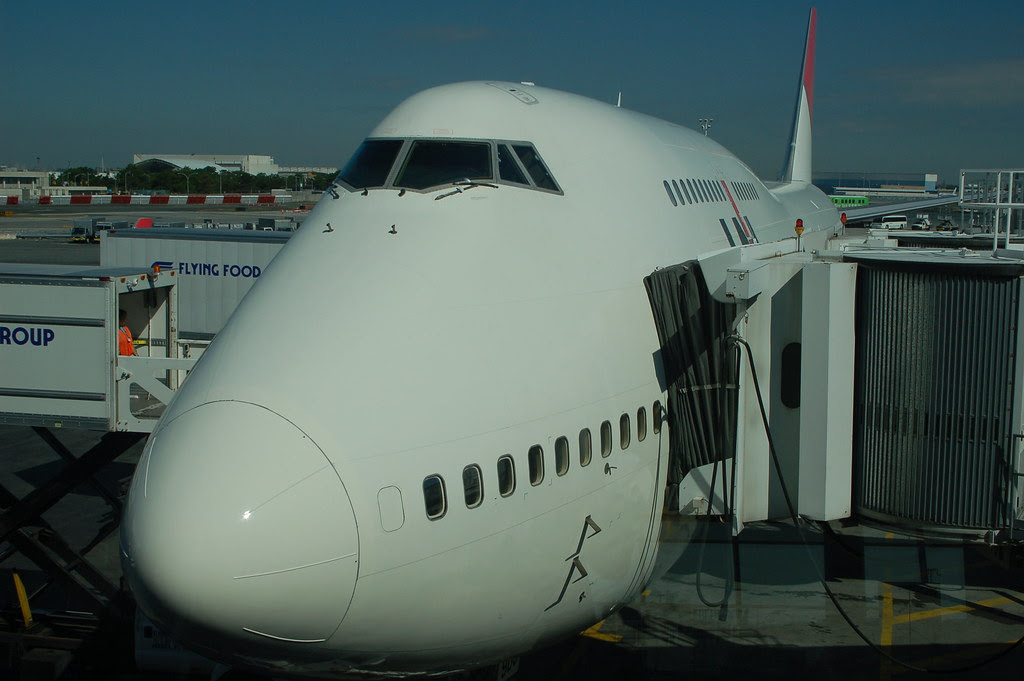 The flight over was great, my employer put me in business class which is always nice, the service on JAL was fantastic and we had a great view of some mountains and amazing glaciers in Alaska. I realized shortly after boarding the plane that I had packed so quickly that I hadn't even had the time to write down the address and phone number of my hotel, all I had was the name which was the ANA hotel Tokyo. At the time I didn't really have a great idea about how I would manage to get into the city of (the airport is 1.5 hrs outside the city), let alone how I would find the hotel. But there wasn't much I could do about it from 35,000 feet over so I just decided I would figure it out when we arrived.

When I got into Narita (the international airport for ), I was a little unsure of how I would be able to manage with all my bags. I normally try to travel light but given that I was moving to the far side of the world for potentially half a year, and that I had packed in only one day I ended up with four checked bags some of which weighed a lot. Thankfully I was able to get everything onto a free luggage cart and the only minor trouble I ran into was that Japanese Customs asked me a few questions about whether I was importing goods or smuggling anything. When I told them I was moving here for work and mentioned my employer's name they took my word at face value and let me go (for the record no I am not a smuggler).

The moment I cleared customs I started the adventure of finding a way into the city and to my hotel. My first run in with the impossibility of communicating through the language barrier came when I converted currency at the airport currency exchange (I normally get currency in the before traveling but again due to the last minute nature of my preparations I just brought whatever dollars I had on me when I left the country). Let's just say in a preview of what would become a major challenge in my day to day life here in Tokyo I wasn't able to understand anything of what the currency guy was saying and he didn't understand me. Thankfully he was still able to get the exchange taken care of.

With the money challenge taken care of I went in search of a route into the city. To explain the challenge, in unlike in most other business destinations Taxis are out of the question to get into the city from the airport. The airport is a long way, an hour and a half by car, from the city so it's several hundred dollars for a taxi. I first tried walking over to the ANA airline ticket counter seeing as how I was trying to get to their hotel, but no one was there. So, I tried the airport information desk thankfully they were able to point me to a bus company. The bus company rep knew just enough English to sell me a ticket and send me to a bus gate at the airport.

I found the gate and was confused to discover that buses pull up to and leave the gate about once every two minutes and each new bus was headed to a different location. The bus company luggage handlers looked at my ticket and told me to stay off to the side for the next 10 mins or so, we couldn't communicate any further so I took their word and waited off to the side. Thankfully my bus came and the bus company checked my luggage on the bus which saved my back from the pain of moving all my stuff.

By this point I had been awake for more than 20 hours, I woke up very early in to have enough time to get to JFK via taxi, complements of my packing the day before I had only slept about 3 hours the night before the flight. Needless to say even with a little sleep on the plane I was in a stupor. So, while maybe I should have been having some deep thoughts about arriving in my new temporary home all I could think while looking out the window during the bus ride was "Wow this place looks really Japanese". Deep I know.

As the ride into the city continued I started to drift off to sleep, as I was looking out the window in a haze of fatigue I saw something that made me think that I might be having fatigue induced hallucinations, I literally saw the Matterhorn and Cinderella's castle. Thankfully I wasn't that out of it, it was just Tokyo Disneyland. A very odd thing to see in the middle of , but it was the first of many odd, entertaining and confusing things I would see in the coming weeks, more on that soon.