The Adventures of my first weekend:

Before I left for literally everyone I talked to about the impending move told me to watch "Lost in Translation". Like a lot of things I didn't have time to see the movie before I came over, so I bought the DVD on my second to last day in the and packed it. I watched it on my laptop this morning (my first Saturday) in my hotel and little did I know that I would he having a live action version of some of the cultural confusion shown in the movie.

After watching the movie, I decided to get a cell phone, so I went to NTT Docomo first since it's their national carrier. No one in the store spoke English, so the women called a hotline and had the operator serve as a translator as we handed the phone back and forth. We finally got to a question about whether I am a registered resident alien, which the answer is no, I don't have a visa, work permit or registration since I don't need any of that for the first 90 days here. Because I am not registered I am basically viewed as an illegal immigrant so NTT Docomo told me they couldn't serve me. 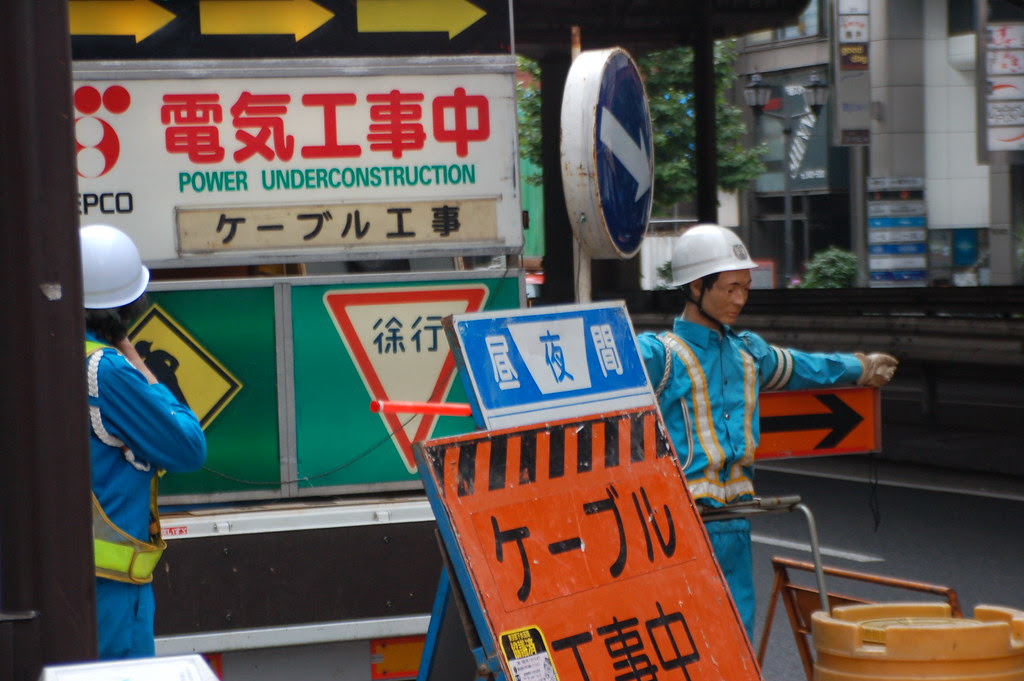 They recommended that I go to Vodafone, and even offered to have an employee walk me down the street to their location. I had seen where it was so I turned them down. About 20 employees bowed and thanked me profusely, they were thanking me and yet refusing to serve me. So, I walked into Vodafone, and like NTT Docomo they had an incredible assortment of 100+ cell phones all really really high tech. Even before I got to I was looking forward to getting a cell phone here just so I could get a super high tech phone from the land of the robot dogs. I took it as a good sign that there was a robot 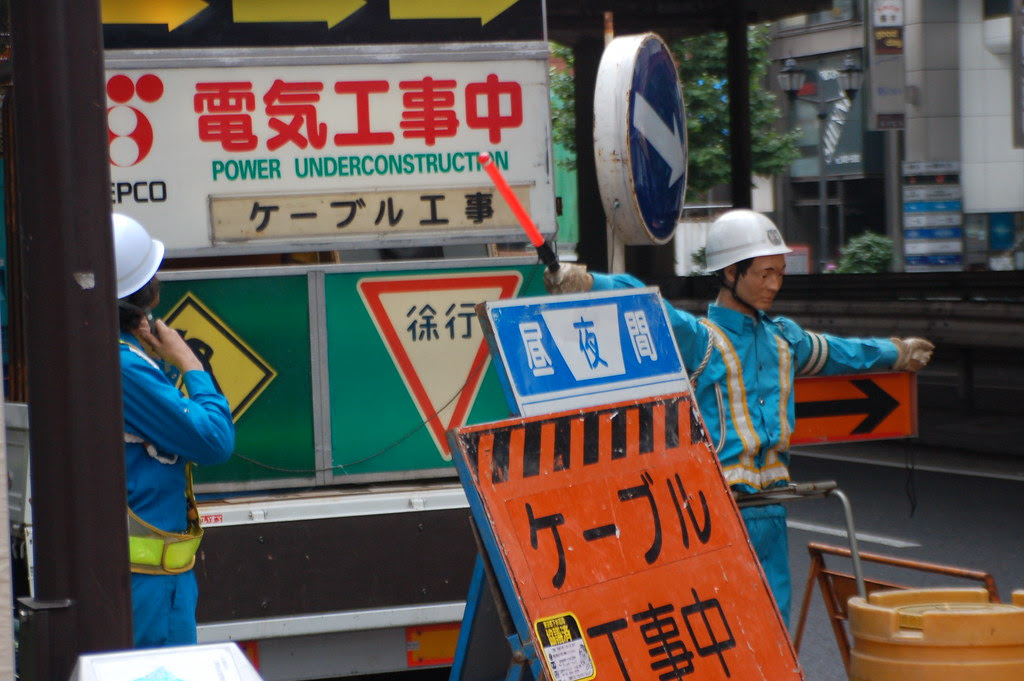 directing traffic around a construction site outside Vodafone (see the pics of the robot to the left and below and note the real person next to the robot dressed almost identical to the robot). 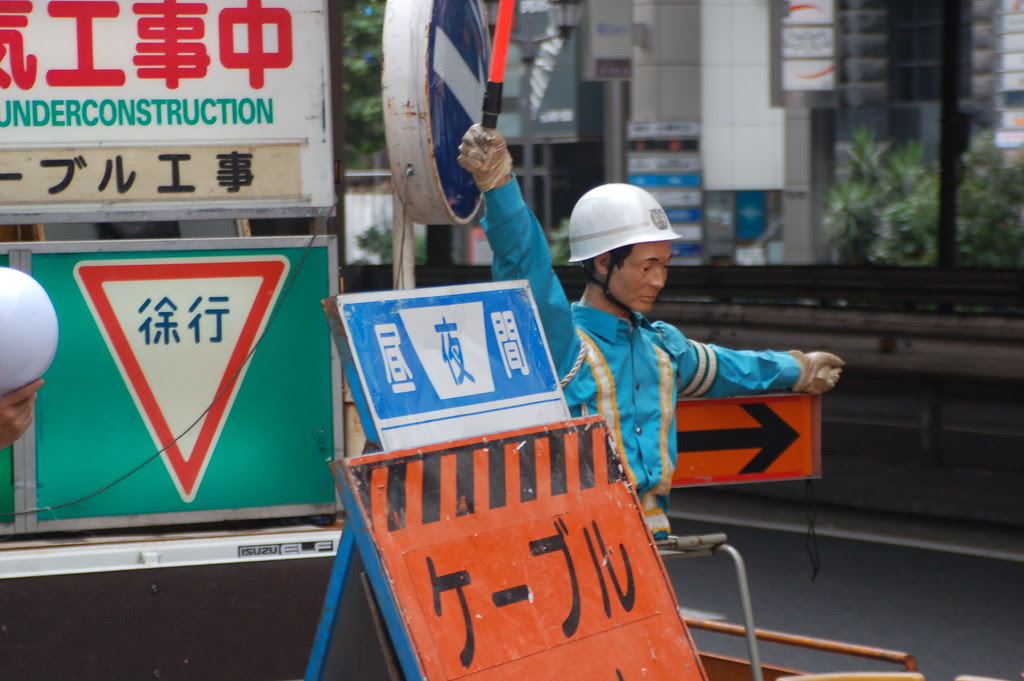 I talked to the vodafone employees and I told them I would like a phone that has internet access and voicemail, they also asked me if I am a registered alien (thankfully they spoke English). When I said no, they told me I could only have one of two phones and that I had to use a prepaid phone. My choices were a phone with so few features it might not actually work as a 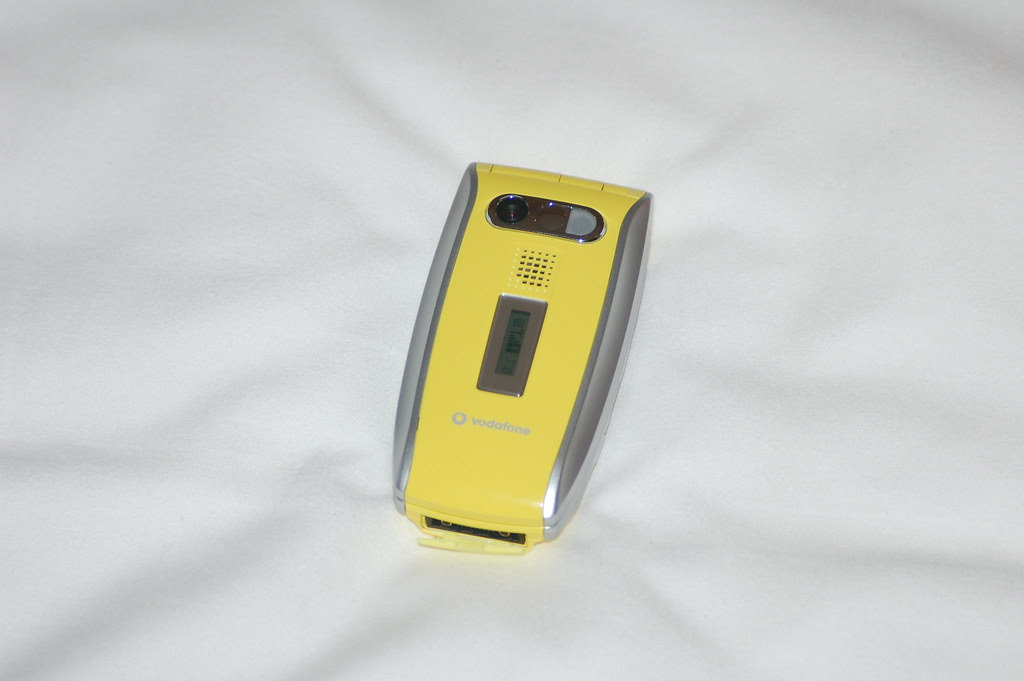 phone, or the one I ended up with, a bright canary yellow phone (see pic to the left). I asked if it had internet access and they said they couldn't give me internet access because I am an unregistered alien. I asked about voicemail, and again they couldn't give it to me due to my lack of papers. No joke, my cell phone has a built in 90 second digital answering machine to capture messages because I can't have real voicemail since I am undocumented. I have no idea why I need papers to get voicemail and internet access. The only redeeming qualities about the phone is that it has a camera phone and that they were able to activate a service they call "Long Mail" which allows emails and text messages that are 6,000 characters rather than the usual 160. The funniest thing is that I tested the built in voice recorder thing, and it turns out that the way it works is that the phone answers itself and the 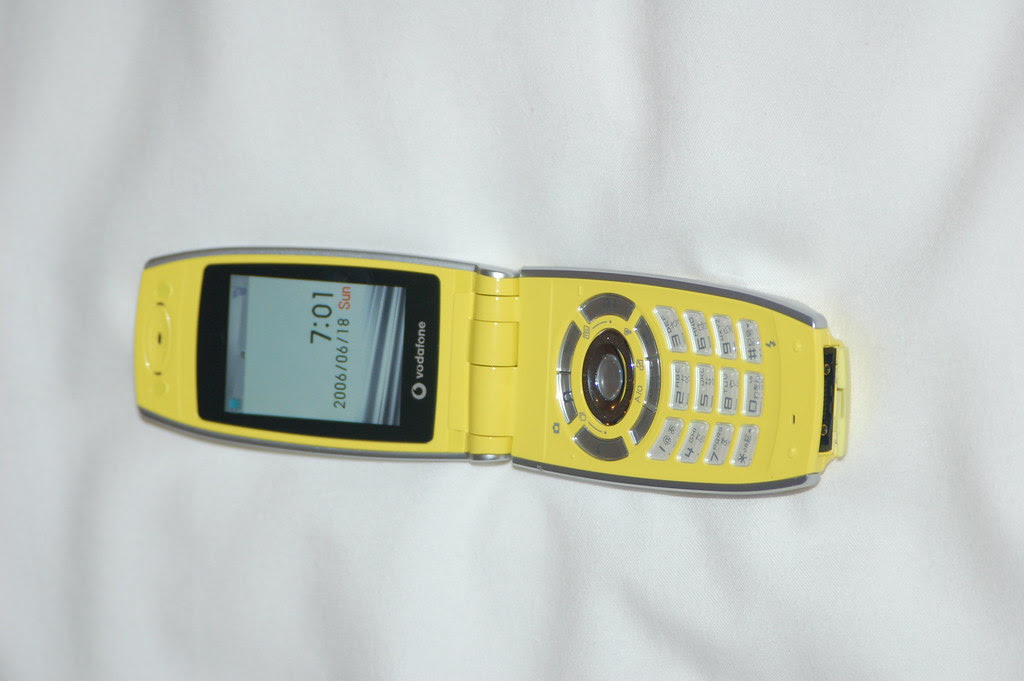 microphone records the person leaving the message from the normal ear speaker (the phone's a clam shell), so apparently if I miss a call and the phone isn't folded shut I won't get voicemail. I can't figure out how to erase the message so it appears that once I have gotten 90 seconds worth of messages that I will just have to go without voicemail. This place is so wacky.